How to Say Hello in Persian

Greetings are one of the few things that exist in all cultures, both in real and virtual worlds. Ask a programmer what was the first thing he learned to write being a student and the most likely answer will be the phrase “Hello world!”. One can hardly imagine anyone starting a conversation without a greeting; therefore greeting words constitute an important part of everyday vocabulary. From a sociolinguistic perspective, the way someone greets another person could reveal plenty of information about the age, gender, and social status of the interlocutors on the one hand, and the relationship between them on the other hand. So, if you are interested in studying Persian, learning how to greet people in this language might be of particular importance to you. In this article, we will briefly touch on the basic forms of greetings and expressions used in Persian. We will also talk about the social context and the origins of each word or expression cited. The words are given in the Perso-Arabic script, followed by academic transcription.

The Social Context: To put it briefly, "Salām", which literally means "peace and welfare" is the most basic greeting between Muslims. It can possibly be one of the most frequently used words in the world, merely because  Muslims make up circa 25 % of the world population. In the Iranian society, similarly, "salām" is being used by people of different age groups, social classes, and Identities. Thus it is the most widely used and basic form of greeting in Persian.

* Compared to the Arabic form (as-salām), Persian omits the initial definite prefix as-.

* Regardless of its religious context, one does not necessarily have to be a Muslim to utilize this phrase.

Response: و علیکم السلام [wa-'alaykum as-salāmu]. This is the common way of response in Arabic, but the majority of the Iranians will most likely repeat the same phrase salāmu ʿalaykum in response. They might also utter that twice as a sign of respect.

[Wa ʿalaykumu s-salāmu wa-raḥmatu -llāhi wa-barakātuhū] "may peace, God's mercy, and blessings be upon you". This version can be occasionally used by the younger generation (predominantly by people who have non-religious worldviews) to greet each other in a tongue-in-cheek manner.

سلام به روی ماهت [salām be ru-ye māhet] lit. “Hello to your moonlike face”, is usually used to provide someone with an amiability that can create an atmosphere of friendship and kindness.

Etymology:  According to M.T. Bahar, salām was one of the first Arabic words to enter the Persian vernacular after the Muslim conquest of Persia and the gradual spread of Islam through the population(M.T. Bahar Sabk-šenāsī I, Tehran, 1958, p. 259). In order to get a better understanding of how things work in Arabic and overall in Semitic languages, we should keep in mind the following underlying patterns of the Semitic languages

- Words are generally made up of 3 consonants or radicals (triconsonantal roots C-C-C, also there can be found roots containing 4 or more sporadically 5 consonants).

- Each root conveys some sort of "conceptual domain".

- Having an established order these roots can be modified by using certain patterns (adding different vowels between the consonants or attaching a suffix/ prefix to the root). This grammaticalization process narrows the initial meaning of the root.

Analogous to Hebrew šālôm, Arabic Salām comes from the same Proto-Semitic *š-l-m* triconsonantal combination that covers the meaning of [piece, safeness, wholeness] in a broad sense.

the most core concepts of the religion, i.e. muslim "Muslim" (lit "one who submits") and the name of the religion, ʾislām, lit. "submission" are formed from this root (A comprehensive list of the words and given names derived from S-L-M can be found here)

The Social Context: Dorud can be well-defined as being a highly acclaimed and prestigious substitute to salām, mainly because in contrast to the latter, it is originally an Iranian word. For this reason, there are lots of people who deliberately say dorud instead of salām. Of all the “categories” of greeting, dorud has the most parallels in other languages either from a semantic or typological point of view. That’s why you can best understand its meaning by comparing it with English hail (an old way of greeting, also c.f. hale and whole from the same root), German heil, both denoting “health, prosperity”, c.f. Old English was hail “be healthy”, Latin salvē, salvēte, lit. “be healthy”, etc.

The origin of the word:  Etymologically New Persian dorud goes back to the Old Iranian *druvataat "wholeness, wellbeing". The derivatives from the root *druva (Sanskrit dhruvá-) are attested throughout the whole history of the Iranian languages, c.f. (from old to the newest periods)

As far as we know, judging from the oldest documented languages, namely Avestan and Old Persian, the lexeme was not used as a way to greet people in the Old Iranian period (until about the 5th century BC). It probably started to be used as such during the Middle Iranian period. One of the best examples can be found in the Middle Persian “Divina Commedia”, the “Book of the righteous Wirāz” (Ardā Wirāz Nāmag), where, having completed his journey, the protagonist salutes the priesthood in the following way:

“Greetings to you from Ohrmazd the Lord and the Archangels and blessings from the righteous Zoroaster of Spitāma…”(6:19-20)

Following this he is welcomed in the same way:

“Welcome you Wirāz, messenger of us Mazdeans, and blessings to you too.” (Following F. Vahman’s translation)

* In academic transcription the x is used for [kh] phoneme.

The Social context: The literal translation of this formula is “Good day” and its use is limited to radio, TV programs, and some other, primarily formal contexts. The only people who use the “Good day” formula routinely are the Kurds, speaking the Northern dialect of Kurdish, also referred to as “Kurmanji Kurdish”. Thus, greeting a Kurmanji speaking person, you can use rojbaş [rozh bash], which literally means “Good day”.

Already starting from the Old Iranian period the lexeme has been used to denote a period of 24 hours. Thus in the Behistun inscription we read:

The Social Context: Xaste nabāšid is a ready-made expression used quite frequently in daily Persian conversation. Literally, it can be translated as “May You not be tired” and its use as a distinct phrasal unit is specific to the Persian language, thus one can not think of a similar phrase in other languages. Xaste nabāšid can by no means be considered as merely a greeting formula since its primary use is limited to working environments and among the colleagues who might meet each other during the day and exchange this expression as a politeness strategy. However, there are many Iranians who use this phrase instead of salām when meeting their colleague for the first time.

xaste, a Participle form of the verb xastan “to wound, harm” which is no longer in use in Contemporary Persian.

nabāšid,  the negative form of the verb “to be” for the 3rd person present subjunctive.

Greetings Based on the Time of Day

To use it in a timely fashion, the rightest time interval will be from dawn to 10 am.

This type of greeting is never used in daily conversation and you will most probably hear it from mass media.

Unlike the afternoon greetings, once in a blue moon, you might hear someone use this greeting, but on the whole, it is not popular among Iranians.

It is a widely used formula either to greet people at night (in this context it corresponds to English “Good evening”) or to wish them “Good night”. Alternatively, شب خوش [šab xoš] (literally “Good night”) can be used in more formal contexts.

When to use: From sunset till dawn.

Etymology: From all the daytime greetings this one is formed with a word of Iranian origin. Persian šab goes back to Old Persian xšap- “Night”, attested once in the Behistun inscription. Together with the above-discussed raucah-, it is used in a coordinate construction formed with a -vā disjunction (like English “or”, “either/ or): 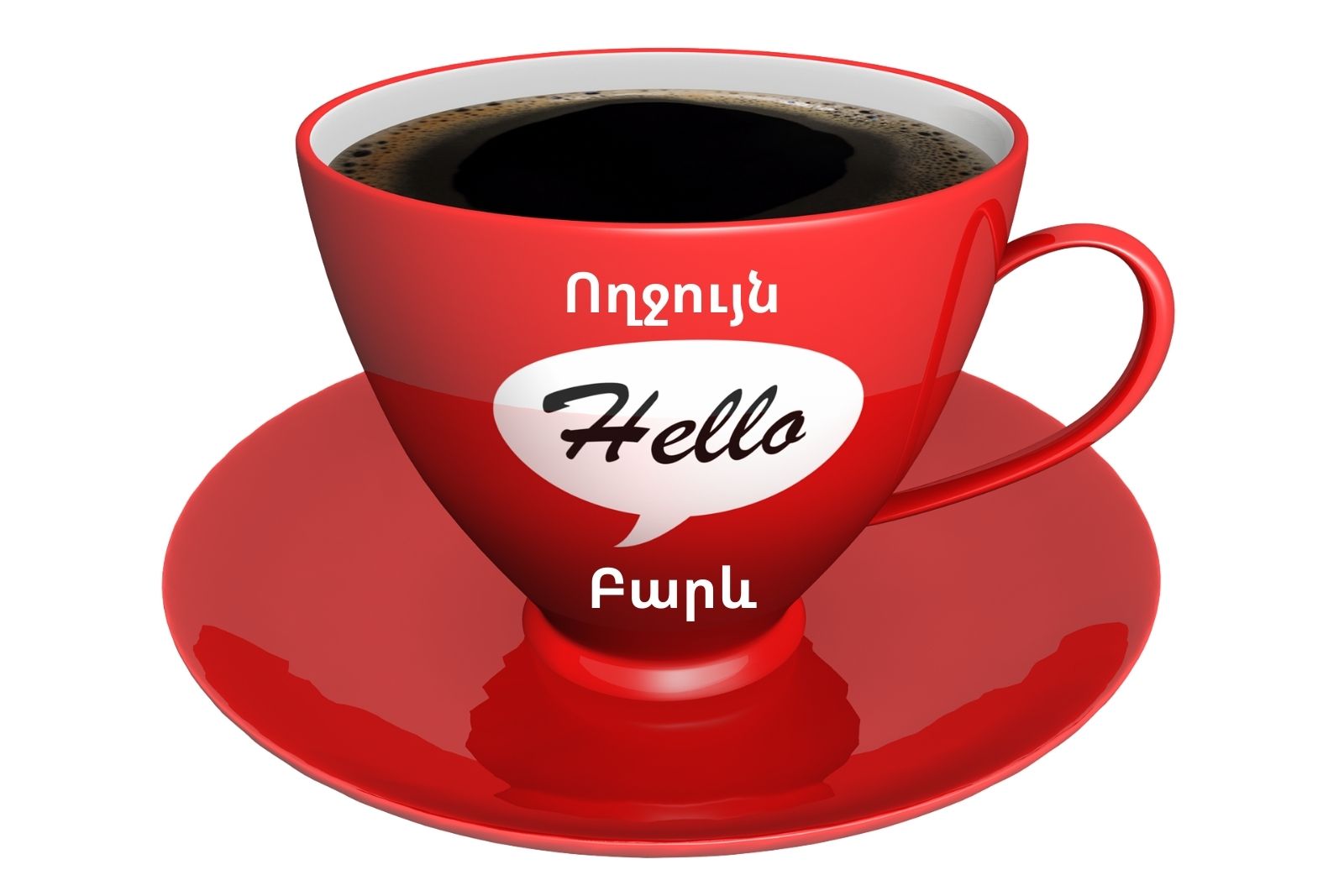 How to Say Hello in Armenian