In December 2017, I was fortunate enough to receive funding not only towards the cost of undertaking an intensive language course in Armenian but to have the opportunity to do so in Yerevan. This experience can best be described as life-changing.

The course took place on Monday - Saturday during the first week and Monday - Friday during the second, from c.9am - 3:30pm each day. Using Dora Sakayan's Eastern Armenian for the English Speaking World (2007) as a guide, Sona Mnatsakanyan, a lecturer in Armenian language and literature at the American University in Yerevan, guided us through all the main grammatical features of modern Eastern Armenian. Grammar explanations were accompanied by additional separate exercises, listening exercises were followed by group discussions and there was the opportunity to present individually. As the course progressed, Sona spoke to us more and more in Armenian and we attempted to respond and ask questions where possible. Within the small group of four students on the Winter School, one participant had done at least three years of Grabar, one, a year of Eastern Armenian and one had been living in Armenia for several months and could converse quite fluently in Western Armenian learnt previously. On the first day, I could only just read the alphabet but Sona coped admirably with the challenges presented by this wide range of experience with Armenian. I may have initially doubted whether I would get beyond sounding out the alphabet but although somewhat behind my more experienced co-participants, by the end of the course I had achieved more than I had expected and feel well-prepared to continue with self-study, until such time as I am able to attend another course, which I very much hope I will be able to do at some point.

ASPIRANTUM looked after us very well: I was the first of the group to arrive and was met by Khachik Gevorgyan of ARMACAD at the hotel and taken out to lunch. On the first and last days of the course, we were treated to splendid meals in traditional Armenian taverns. After class on one of the afternoons, we attended a lecture by Dr Hovhannes Hovhannisyan, associate professor of religion in the Department of Theology at Yerevan State University, on the history of the Armenian Orthodox Church. Although the topic does not relate to my research, it proved to be really interesting and it was more like a seminar than a lecture, so we were able to ask questions and it provided us with an overview of the relationship between state and religion in Armenia from the earliest times to the present day. On my last free day in Yerevan, I was able to visit the Matenadaran, one of the reasons why I had wanted to visit Yerevan in the first place. Having previously attended a workshop on Armenian manuscripts at the State Library of Berlin, I was aware of the importance and breadth of the collection and was therefore keen to see it myself. I thoroughly recommend taking a tour of the museum, it was very informative and there are both permanent and temporary exhibitions showing the development of illustrated manuscript/book production, as well as more modern historical archive material.

The language course and trip to Armenia far exceeded my expectations in every way. My belief that an understanding of Armenian language, history and culture would, and will enhance my study of the Late Antique, Near Middle Eastern, monotheistic milieu in which the Quran arose, was unequivocally confirmed. I intend to continue my study of Armenian, until I am hopefully able to access a body of apocryphal literature, which in some cases is only preserved in its entirety in Armenian. 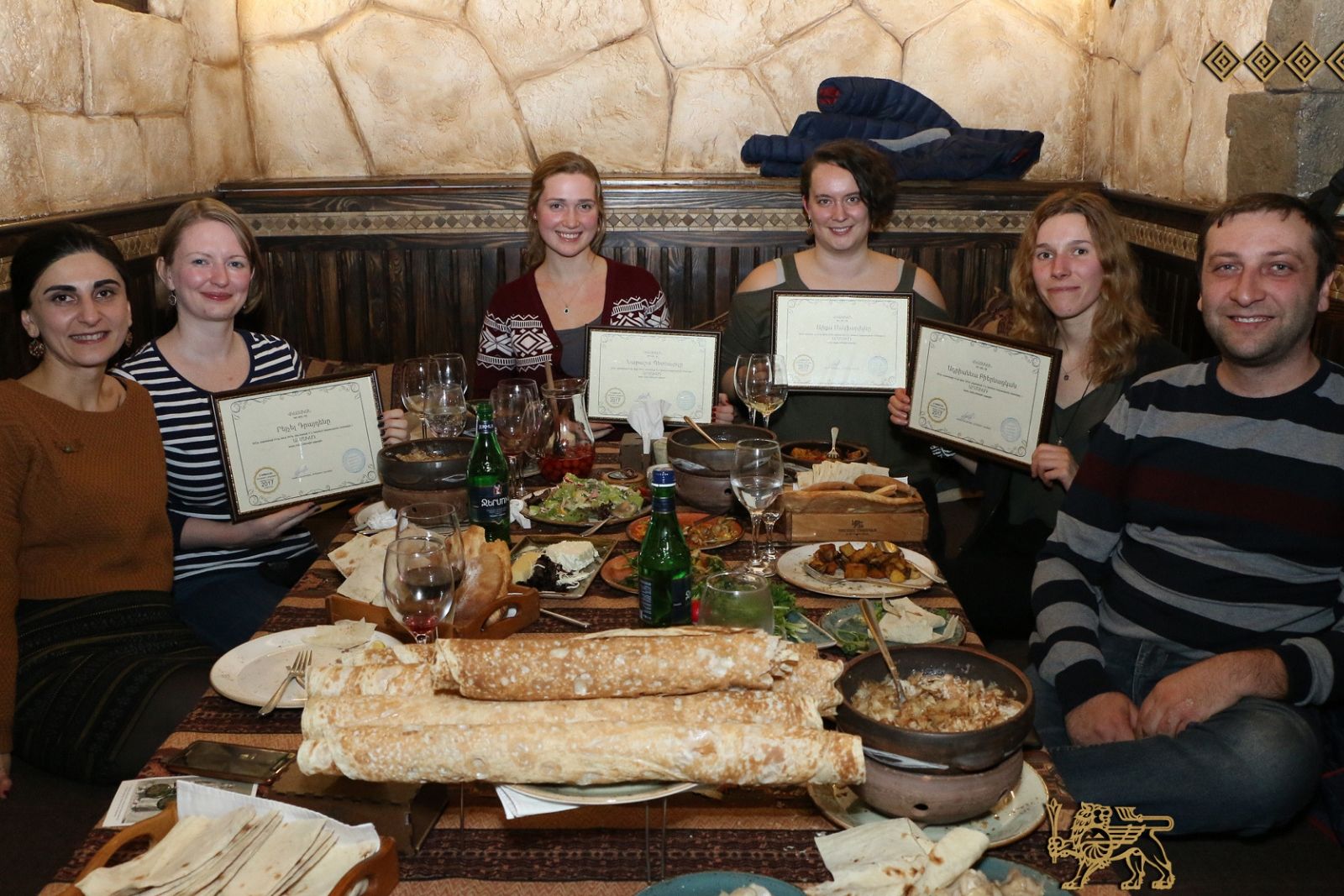 Armenian Language courses offer participants to master skills in written and oral modern Eastern Armenian. We also aim at helping students to rapidly deepening their knowledge in colloquial Armenian. Reading and interpreting Armenian texts from different periods may be included in our Armenian curriculum. Before the start of the classes students will receive an online support from our Armenian language instructor.

“I was very pleased with my experience in Armenian language winter school 2016. The teacher and organizers were both personal and professional, responding very quickly to any and all inquiries and making everything about the application process and other logistical arrangements as smooth and painless as possible.”